Life continues to be good! : Back in the Percys. 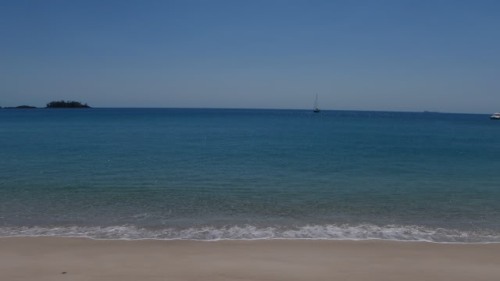 It’s been a while since we have posted, the cruising life is good and we have been distracted 🙂

We left Mackay the day after the northerlies came through, and didn’t we know when they arrived, Mackay Marina became a very rolly uncomfortable “anchorage” for the night.

We first headed for Digby Island as it appeared to have the best protection from a northerly compared to Curlew Island. We caught a fish on the way, another spotted mackerel this one was much bigger than our previous efforts – easily 85cm. After having fish tacos for dinner, we made the best of a bit of a wild night at anchor, but managed to get a little sleep, but left early the next morning for the Percy Islands where it would hopefully be more comfortable.

We anchored for the night in White’s Bay on the southern side of Middle Percy Island with a little excitement as the anchor windlass gave up the ghost for no apparent reason, having worked solidly for the whole trip. We quickly let the anchor free fall and put out as much chain as we had. The winds were strong and we pulled back on the anchor chain all night, but we held securely.

Next morning we wanted to go around to West Bay as the winds during the day were turning southerly and for the evening there would be light north easterly winds. We attempted to up anchor, however the anchor windless was still not working, even after some tinkering in the battery bay the evening before after which we thought that we had fixed the problem. So we began the “fun” task of hauling in 55 metres of anchor chain by hand. We got around to West Bay and had the place to ourselves, we found a nice patch of water and anchored in as close to the beach as we could… maybe a little too close for comfort, as we discovered just before low tide when Craig went swimming about 3 or 4 metres off the back of the boat towards the beach and discovered that he could stand! However after a quick calculation we realised that we would have just enough water under the keel at the slightly lower low tide that was to happen early the next morning. We went ashore to hang the sign that we had made for the A-Frame hut and met up with the crew from another boat who had also been at Digby Island and White’s Bay in the last few days.

We spent the night in West Bay before setting off the next morning for Delcomyn Bay, well a bay near Delcomyn Island that hasn’t been surveyed fully yet, the anchor windlass behaving much better after we fixed it’s battery terminals.

It was a fairly uneventful trip where we experienced that strange VHF phenomenon of skipping where we could hear the charter boat radio scheds in the Whitsundays (150nm to the north) and boats contacting Bundaberg VMR (200nm to the south) when VHF radio is usually line of sight communication only. The charter yacht radio scheds kept us entertained for a while, with all the funny questions from the charterers to the charter bases. We arrived at Delcomyn bay (a lovely protected anchorage in a northerly wind) just in time for a storm to arrive, along with rain and squally winds, turning the breeze southerly for most of the evening, but with lots of anchor chain out we slept soundly. 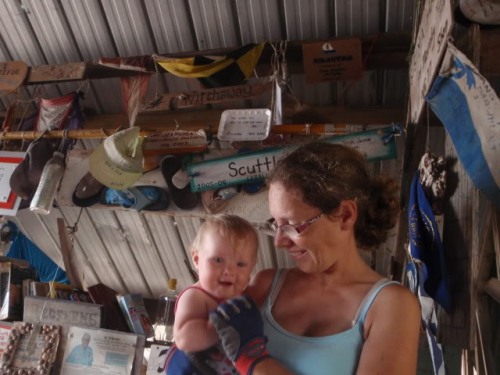